Selecting an image for processing  isn't always as easy at it seems, especially if you have a fast moving subject and you have been shooting in burst mode. If I'm using burst mode for insects I generally set the HS20 to take 4 shots at 3 frames per second. The reason for the low number of shots is to speed up the write time to the SD card. The frame rate may seem slow at only three frames per second but this allows sufficient time between frames to better show the movement of the subject. It also means that you don't take the shot and miss what could be the best frame of the day. I've shot at much faster frame rates with the HS20 only to find that the best shot was the last one and the subject has moved half way out of the frame. Slower frame rates can dramatically improve your keeper rates. As with all things experimentation is the key until you are happy with the results.
The image I have selected for our use here is the following image. Click on the image and select save target as... if you wish to try this exercise. 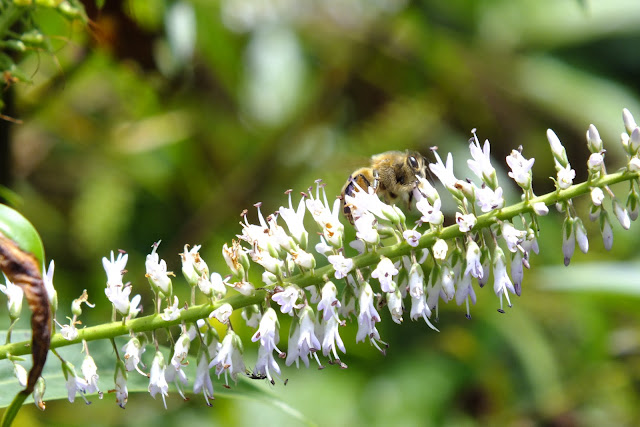 Some notes about this image.
This was one of four images taken in burst mode with the settings as described above.
The Exif data is attached if you are interested.
It was shot in EXR HR mode with the image size set as 3:2 medium. I don't usually shoot HR in medium file size as this yields a 7 megapixel file size. However even at this resolution the HS20 is capable of very nice images if shot well. I used average metering with the Ev set at +0.33 as I wanted a bright image thus allowing more room for changes in the processing stage. I always check the image in camera to see if there are any areas of blown highlight. If you haven't done this before with the HS20 its really easy to do. Press the image review button and scroll till you get the image you want. Then press and hold the bottom of the two AF buttons ( that's  the one directly above the white balance button), this brings up the image information as well as a small preview window. If there is any over exposure in the image this will be blinking on and off. Its at this point you can decide whether to keep or discard the image. This image showed a small amount of blown highlight on the flower but the bee was well exposed so I kept this image.
However once I had the camera back home and the images on the computer it became apparent that there had been some slight movement in the shots yielding slightly blurred or soft focused images. This doesn't show all that well when reviewing images in camera with the LCD.
So we have a bright image, slightly overexposed and a little off in the focus. The question now is can we salvage anything from this and the answer is yes we can.
This is where post processing comes into its own. Imagine the image above was the only one you had after you had been on a special trip, that's true of this image. I can't go back and shoot it again, if nothing else the bee is unlikely to be there and the flowers will now have wilted. We therefore have to do the best we can.

Areas needing attention in the image below can be seen from the arrows. 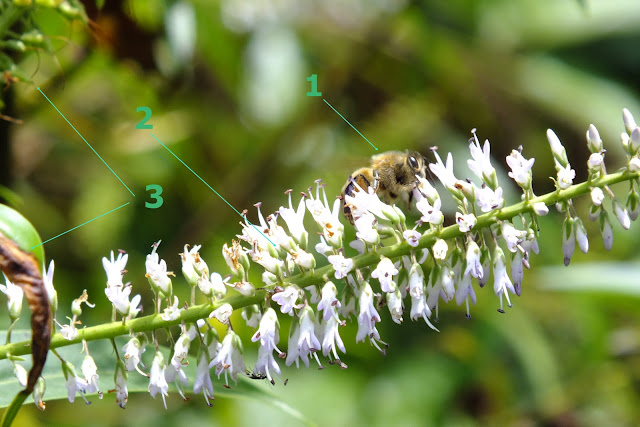 The image does then present some problems and at first glance you could be forgiven for tossing this one straight into the trashcan. Doing so could rob you of a useful image after post processing.
Now that we have identified key areas and requirements for this image we can start to get to work in the editor.