The HS10 as a Sports Camera

For the last two weeks I have been working and staying in Tauranga N.Z. Because of work commitments as well as weather issues there wasn't a lot of time to get out and about with the big Fuji. For some time now I have wanted to do some sort of sports action photography. There has been a lot of conjecture as to how useful the HS10 would be as a sports camera, as its shot to shot time in Jpeg mode was approx 1 second, and this was seen as being too slow.


As of this last Wednesday I can say that this is not an issue. The series of photos I took of the Kiteboarders was often only a couple of seconds between shots. This wasn't a problem, as during the write time for the previous shot, I had time to decide on what the next shot would be. With the best part of 30 or more Kiteboarders there was more than enough action.
The camera was set to Continuous AF as this meant I could track a target with the shutter button half pressed and the AF would continually focus on my intended target. I tried doing this in tracking mode but the sheer dynamics of the subjects was far too fast to allow the tracking mode to operate in these conditions. All photos were taken using "P" mode with EV -67.
Overcoming white balance deficiencies.
One of the issues with small sensor digital cameras is the inability to handle white balance levels well. The Fuji HS10 can at times be a real handful in trying to get good highlights without sacrificing the overall look of the image. One of the most difficult times this happens is during the sunset hours when taking shots looking toward the setting sun. Usually you either lose the sky or lose the foreground depending on what you are aiming the camera at. Using manual control can help a great deal, but if you are shooting fast moving subjects this can be problematic.
The environment.
The series of photos I took of the Kiteboarders was taken during the hours of 7.00pm to 8.15pm on a fine day. There was a reasonable amount of high cloud, fast moving, that was changing the light minute by minute at times. Add to this a very low sun angle, therefore a lot of water reflection ( very difficult for a digital camera), a breeze of 20 to 25 knots making hand held photography difficult. The ambient light was highly variable and as the time went on more and more light loss because of the high cloud. Even with the best of cameras this was going to be difficult and to be honest I did lose quite a few shots. However I did end up with about 100 keepers. So this then was the type of environment I had to work with.
Sun-ward Silhouettes
Some of the first shots were taken looking west directly into the most sunlight water with very strong reflections. 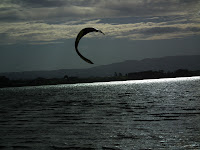 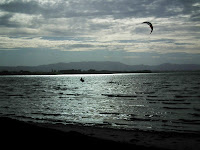 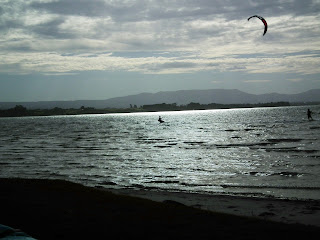 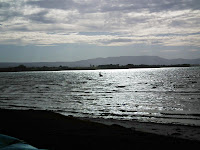 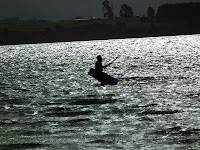 The HS10 actually did much better than I initially thought it would. The originals were quite dark due to running at EV-67 but raising the light levels brought out the detail quite well. They may have been even better if shot in RAW but there wasn't sufficient time to allow this. 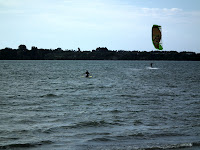 The distance to some of the Kiteboarders was quite far, with some of them zipping a couple of kilometers off shore and back again so this allowed for a variety of shots, with the light levels fluctuating depending on what direction they were heading. 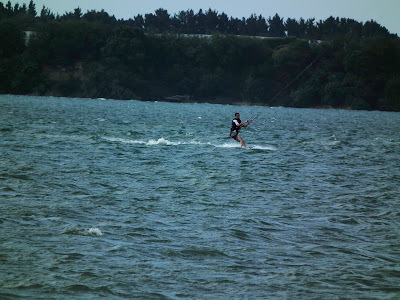 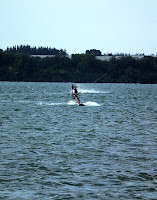 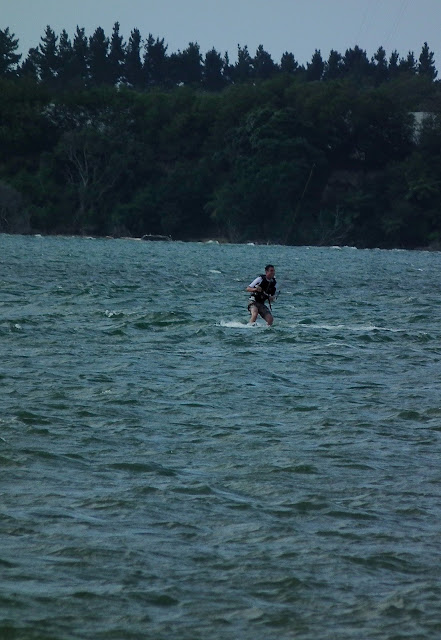