From old to New

In the Fuji Talk Forums at dpreview.com  there is a thread regarding what your first camera was. Mine was a "Diana". These were considered toys because of the plastic bodies. Made cheaply they were popular with parents as novelty  gifts for birthdays and Christmas presents. The took a 120 paper backed film. You could buy either 12 or 20 shot rolls of film depending on what you could afford.

They have now become a firm favorite for the Lomography photographer and have recently been relaunched as the Diana+. heres an interesting link well worth spending some time looking at. http://www.lomography.com/about 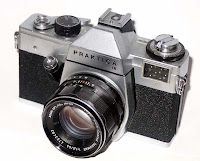 For me this was my introduction to taking photographs at age 12. By the time I left college I was able to start work with a professional photographer and graduate on to my Practicka LB SLR with a  50mm f2.8 lens. These two cameras, more so the Diana were what really got me started in the art of photography.If only my parents had realized  what they were starting.

Sadly I seem to have no photos left that I took withe the Diana. I do however have a small number of some of the earliest photos taken with the Praktica. These are black and whites taken during the summer of 1973 at our home in Tauranga, New Zealand. I have recently scanned them as the photos themselves are very slowly degenerating.

Just some of about 20 photos that I have salvaged through the processing with Lightroom 3 and other tools. When these were taken I had a small darkroom at home and all these photos were processed and printed by me. I was 16 years old at the time and I thought I had some pretty high tech stuff. If I had known then what was about to come in the photographic world, I probably would have said it was a fairy story. How things change.
Happy Snappin.