I like Fuji cameras. As a rule they tend to be good performers, perhaps not always stellar, are innovative in their design, this is seen in the X series currently being produced and also in the HS series. As well a a dearth of little compacts for people who just want a point and shoot holiday camera.


So what exactly is going on over at Fuji HQ?
The X100 was a shot at changing the direction and tempo of the Fuji enthusiast cameras, bringing in retro style design and quite classy at that. Build quality at least in the choice of materials for the X series has been excellent, I haven't seen one bad report about the quality of the casing. But that seems to be where the good news stops. As with anything new there are always going to be teething problems. But at $1500.00NZ ( today's price for an X100) I would expect a premium camera to perform as such and the X100 has been dogged by problems. Probably the most worrisome would be the sticking aperture blades and the slow auto focus. There have been various other complaints regarding this camera as well, but by comparison these are generally only little things.


The X10 started out life as the next best thing to an X100 and its design and looks would suggest a premium compact was what the buyer would get. I have been following discussions regarding the X10 very closely at Dpreview and other prime photography forums, and one thing is very clear, despite its great potential it is seriously flawed.
The first of the major complaints was regarding what has now been tagged as the  "specular orbs" issue. The majority of comments in this matter have been around the very poor handling of bright light reflections and night shooting where bright light sources are part of the images.
A Dpreview forum member posted this image and he is not alone  in having White Orb syndrome. The reflections created by strong overhead lights are being translated by the camera into round, hard edged orbs ( called blooming).Where a starred effect with a small undefined centre should be displayed all that is shown is the orb. Readers who are considering this camera may want to read through this and other threads at Dpreview before deciding if this is going to be an issue. Another fault that has just been observed in the last few days is the way that the X10 handles the color Red. In most images it appears okay, but several users are now reporting that the reds in their photos are considerably closer to pink. It is possible to correct some of this in PP, but it again suggests that something is amiss in the way the Jpeg engine works in the X10. Users shooting RAW with the X10 report that the color is correct in RAW images so it appears to be a Jpeg engine problem.
This is a serious problem as one of the major selling points with EXR cameras is the ability to produce stellar Jpegs that rival any RAW image but with out the need to Post Process. Users report that the camera does this exceeding well, but has a tendency to clip the red in the image thus creating pinks instead. I rather think that this should be curable with a Firmware update, and hopefully they can reduce the amount of "Blooming" as well with further firmware updates.


So where does this leave the prospective X-S1 buyers, myself included? It would be fair to say that I'm rather nervous as to buying one given that it uses the same sensor as the X10 and most likely the same Jpeg engine.
I would want to thoroughly test one before buying in this case unless Fuji is able to cure the X10 woes with a series of firmware updates. I have my fingers crossed that its not a physical problem such as faulty sensor design or an undefined production problem


Now for some good news. All the talk lately about the X10 in regards to color and specular highlights got me thinking. Just how well does the HS20 handle this type of shot. I'm pleased to say that it handles it exceedingly well, better than some of the competitions cameras.
By pure dumb luck a couple of mornings ago I found my self out in bright morning sunshine with a lovely red Mini in front of me with some excellent reflections. As you can see from the following images the reflections are nicely "starred" and have a soft undefined centre, just as I would expect them to be. The color of the car is perfect no changes needed via PP work.
If I were to print the image and hold it next to the car it would be a match. Kudos to Fuji, it shows how good the lens in the HS20 is and also that the sensor is doing a very nice job. In fact other than the less than stellar video and the cured heating issue the HS20 has turned out to be a real success for Fuji. I haven't seen a complaint anywhere in months regarding this camera so I know Fuji is well capable of producing very good cameras. The IQ in both the X100 and the X10 are also testimony to that. 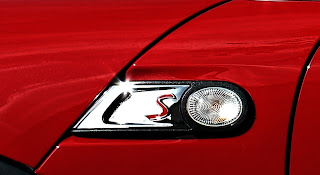 Hopefully Fuji will have settled on a fix for these issues either by firmware update or mechanical repair. Annoying to be sure but the potential in all of these cameras is too good for Fuji to just ignore the problems and hope that people just put up with it. As consumers this isn't acceptable. When buying a premium product it not too much to ask that you get a premium product in return. The odd production fault is always possible but these sorts of problems suggest this is more than just the odd one in the batch slipping through quality control.
Time again for Fuji to step up and be counted. Lets hope they do.
Posted by R. McKenzie at 10:45 AM