There is a comparison currently under discussion at the FTF forums in regard to image quality between the XS1 & HS10. It is by no means scientific but does show how real users would use the camera and the type of environment it may well be used in.
Follow this link for a look at the images and the following discussion if you are contemplating buying an XS1.
Below is my reply to the creator of the forum thread with a accompanying discussion on the merits of the purchase of the XS1. This is a relatively brief reply as I didn't want to break it down to a basic nuts & bolts level.

Nice preliminary comparison. I would say in IQ its 50/50, the XS1 is better at shorter F.L but the HS10 is clearly better at longer F.L
Some points to consider if you are contemplating buying an XS1
To date I haven't seen a single XS1 image that is significantly better IQ wise than my HS20. Right from the start I questioned this, and to date have yet to be convinced there's any real improvement of the 1/2 sensor used in the HS20, and why would you pay for a bridge camera that's clearly less than expectation and doesn't even seem to match the quality achieved by Fuji with the S100fs, the benchmark cam for large bridge cameras.
And that's what its about. If you don't want a DSLR, but rather an all in one solution, with better IQ than the super-zoom HS20, then the XS1 should be the camera of choice, and for most purposes this camera should be as good operationally as an entry level DSLR. Clearly its not (at least at the moment), thus it really cant justify its price point. 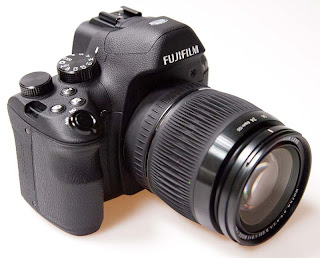 This is the market that the XS1 competes in and buyers at this level have some pretty serious sets of requirements. My advice would be look at the HS30 and watch Fuji to see what they are going to do about the known issues with the X series cameras.
The thing I find most interesting is the possibility that there may and I stress this  there "may be" a information update due Mid March. This has now been reported from several sources from Europe. My hope is that Fuji do one of the following, total X10 & XS1 product recall, or a partial recall if product is less than one month old, or send in for no costs repairs if it is indeed possible to repair the known issues being reported by users.
Certainly this would restore a lot of faith with current Fuji users. As always we wait in anticipation. There's one thing we can say about Fuji, there's never a dull moment with Fuji at present.
Posted by R. McKenzie at 11:56 AM