While out at Raglan over the long weekend just gone, we spent a little time out towards Whale Bay, which is further around the coast and looks back towards the entrance to Raglan harbour.

We stopped at a favorite surfing area and were talking to some locals when I spotted the para-gliders back towards the harbour entrance. They were at a guess 3 to 4 kilometers away.

To demonstrate the versatility of the HS10's zoom. I did a three shot series from wide angle to full zoom. The long shots would have yielded a crisper look had I had a tripod. I was able to use the car as a rest and that helped somewhat.

This shot is taken at full wide (24mm) and shows the raised headland that shelters the entrance to the harbour. If you look carefully you may see a smudge above the headland. Thats the para-gliders.


The second shot is taken at the equivalent point that a 350mm DSLR telephoto lens would show the image. (bearing in mind that different cameras can give differing results.) Shot at 100mm setting on the HS10.

The final shot in this series is taken at full zoom 126mm (720mm) equivalent. While the photos themselves are a little soft, image stabilization did a fairly good job of keeping the focus of the shot. 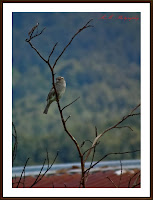 The difference between shots taken with the tripod are easier to see in this photo as the crispness of the image is improved and there is little softening around the edges of the shot.